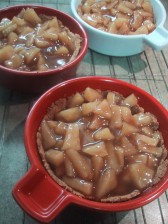 Tip:
When cooking the apples, keep the sauce pan covered. Otherwise, the liquid from the apples will evaporate and the mixture will probably burn.

Have you too noticed an increased desire for desserts during Ramadhan? Or is it just me?

At any rate, these apple tarts came about through a marriage of two recipes. Here’s how I did it insha’Allah.

First, I adjusted this simple but tasty stove-top {Chunky Apple Filling Recipe} for 1 pound of apples since it was all I had; it was enough alHamdulillah. With no lemon juice on hand, I substituted water! And I used white sugar instead of the brown but added about ½ teaspoon of molasses . . . after all, brown sugar is just white sugar + molasses. The molasses adds flavor and creates that beautiful color.

Next, while the apples were simmering in the sauce pan, I made this gluten-free {Sorghum Pie Crust}.  I used butter not shortening, and added ½ teaspoon sugar to the dry ingredients because I know this recipe is a bit on the salty side.

Next, I divided the dough into ramekins, patted the crust into the bottom and up the sides of the ramekins, and baked according to the recipe instructions.

I let the crusts cool for about 10 minutes before piling in the cooked apple pie filling.

Check Us Out [Search]

Lookie What I Found [Links]

Read those labels! There are lots of products that surprisingly contain wheat or gluten: